The Struggles of Waiting for THE Call 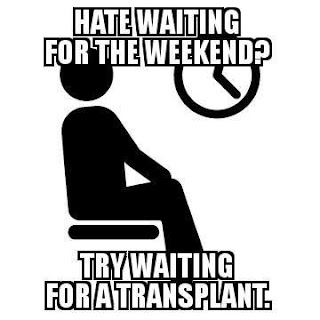 It's been 124 days since I was listed. At first, I was able to not think about it every single time the phone would ring. About a month into waiting, that started to change. I'd hear my phone ringing and jump to see who was on the caller ID, only to disappoint myself when it wasn't my hospital calling, and even more anxiety when a Grand Rapids/Spectrum Health number would roll across the screen, followed by disappointment when it wouldn't be someone on the other end calling to tell me they had lungs...
Waiting is definitely difficult at times, maybe even more so than the evaluation process (I'm not fully decided on that part yet). I go through phases of thinking about what the future holds after I get new lungs and I am recovered and able to enjoy life on my own terms, and then there are times I think "wow, I've never been in a place where I've really been able to seriously think about and believe that I'd have a chance at a real future," and that in itself is difficult to process. And also the thoughts of "what if lungs never come?" or "what if I never get that call before I'm "too sick"?" It's a big roller coaster of emotions and wondering and questioning. To be completely frank, sometimes it's downright terrifying to think about the different outcomes. 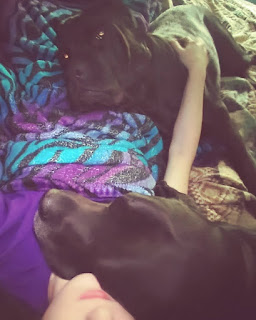 Lately, I've been stuck in the mindset that I don't know if lungs will ever come. My heart has stopped jumping every time the phone rings. I'm not wondering what it might feel like to take that first breath with shiney, new-to-me, lungs anymore. I'm just living in the moment, which if I'm honest with myself and everyone else, isn't at all exciting. Don't get me wrong. I'm not depressed or sad. I'm just in the "here and now" and going through life thankful for what I have currently. And that could all change tomorrow; I don't know.
Physically, I'm hanging in there. I'm keeping up with rehab at home since I graduated from pulmonary rehab a couple months ago. Treadmill and weight exercises at least every other day. A lot of days I really have to force myself to do it. It's exhausting. And even though my incredible hubby has picked up most of the slack (household chores) on top of what he normally does, I am still struggling to keep up with the few things I'm responsible for doing. Thankfully, my mother-in-law has been sweet enough to come over and help me out with some of it. I know she'd come over a lot more, if I asked her to, too, but it's so hard asking for help already. I know everyone probably gets tired of telling me to ask for help when I need it and that they don't mind, and I know that's true because I'm the same way, but being the one needing the help is difficult. So please, be patient with me. 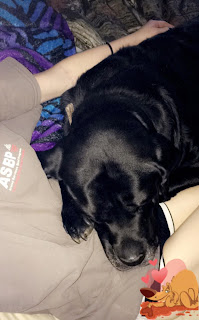 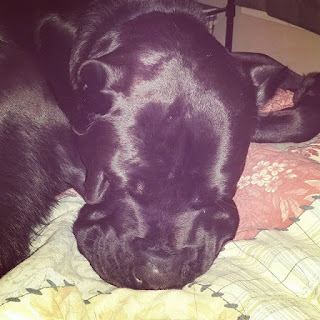 Lately, I've really been struggling with being able to sleep much because I can't breathe when I lay down, which adds to my exhaustion. Overall, my lungs are just tired. That's the only way I can think to explain how this feels. I constantly have to think about my breathing, and sometimes, it almost feels as though I am forcing myself to continue to take each breath. I know my fur babies can sense that I'm feeling worse, as well. They've always been momma's boys, but especially so as of the past several months. Every time I get up to do anything, they're right there. They follow me everywhere. If I go to bed before Jeff, they come to bed with me. If I stay up later than him, they stay in the living room with me too. They're just always making sure their momma is ok. And that's just one of the MANY reasons why I love them so much! Sometimes, they're the only reasons I get up in the morning and push through the day. 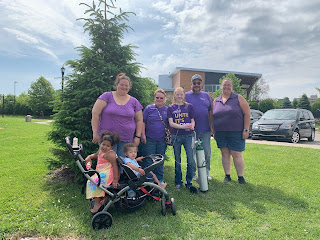 This past weekend was the annual Great Strides CF Walk in Mishawaka, IN. I was blessed enough to have my mother and father-in-law, and a couple wonderful ladies from our American Legion post and their kiddos/grandkids come to the walk! I also ran into a few other CFers who I've been friends with on social media. So it was cool to see them too! Our walk alone (for those who aren't familiar with Great Strides, there are multiple locations across the country- several in Indiana alone) raised over $56,000.00 dollars for the Cystic Fibrosis Foundation (CFF) towards research for new and better drugs to treat the disease and ultimately for a cure! CF does not receive government funding for research, the way something like cancer or diabetes do. So most all of the money used for research/drug development comes from fundraising through events such as Great Strides and other CFF events. There are several other organizations out there who also do fundraising for CF, but the CFF is the main one.
Since my last post, I was admitted to the hospital. April 22nd, I had an appointment with the transplant team. Before I even spoke a word to Dr. Girgis when he entered the exam room, he said, "I can already tell you need to be in the hospital." And I did need to be admitted. My "normal" breathing is already pretty labored and I always have a chronic cough, but that day (and for several weeks prior) it was definitely worse. So much so that he didn't even want to me return home to pack a bag. I did convince him to allow me to though. I had to say goodbye to my fur babies before I spent days to weeks away from them and my husband always seems to "forget" some of the things I ask him to bring for me when he packs my bags. I don't pack lightly, and he doesn't care for it. Lol. So I was admitted April 23rd, for what we thought would be a routine stay. Unfortunately, it did not go according to plan. I ended up in ICU for a short time while there after having a pretty bad episode of hemoptysis. I had a pretty bad couple days of severe anxiety with that because it took me right back to July 2016 when I had a major episode of hemoptysis and landed myself in ICU on a ventilator/life support. Shortly after that we found out that I had a fungal infection in my blood and because fungus 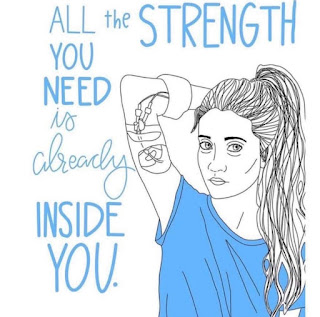 likes to stick to the plastic catheters they use to make ports and central lines, I had to have my port removed, which meant essentially no IV access. We managed to get a couple days more of antibiotics through peripheral IVs, but that was short lived and we ended up having to cut my round of antibiotics short by a few days. I finished my course of antifungal treatment orally and was able to go home on May 9th. My amazing foster mom, Jennifer, was able to fly out for several days while I was admitted to stay with me during the day. It was so nice to see her and to have someone there with me a lot of the time. Living 2 hours away from the hospital and having full-time jobs, it's harder for my husband and in-laws to make it up to visit as often, so I really appreciated having Jennifer there.